Enlarged prostate, a condition known as benign prostatic hypertrophy (BPH) or benign prostatic hyperplasia, is very common. The prostate gland becomes enlarged in many men as they age. BPH rarely causes symptoms before age 40, but more than half of men in their 60s, and as many as 90 percent in their 70s and 80s, have some symptoms of BPH. Treatment for an enlarged prostate is not always required and will importantly depend on whether there are accompanying urinary symptoms. 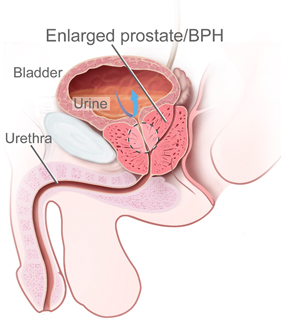 Many BPH symptoms result from the partial obstruction of the urethra, resulting in thickening of the bladder. This thickening causes the bladder to hold less urine, leading to frequent urination during the day and night. The gradual loss of bladder function may also result in incomplete emptying of the bladder. The symptoms of BPH vary, but the most common involve changes or problems with urination, such as:

The symptoms of BPH arise from both prostate enlargement leading to mechanical obstruction and increased tone of the smooth muscle in the prostate. The size of the prostate does not always determine how severe the obstruction or the symptoms will be. Some men with greatly enlarged glands have little obstruction and few symptoms, while others, whose glands are less enlarged, have more blockage and greater problems. 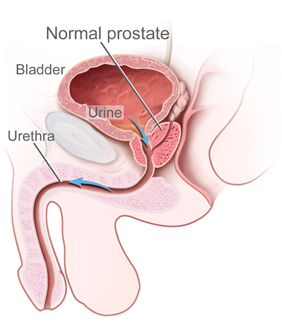 The type of drug for the treatment of BPH is the 5-ARI family, which acts to shrink the prostate. The first drug in this class, finasteride, was approved by the FDA in June 1992. Finasteride was also marketed as Propecia for hair regrowth. The second drug in this category, Avodart, was approved in November 2001, but there is no study that compares dutasteride's usefulness to that of finasteride, which is a last-choice drug for treating BPH especially in light of the increased risk of serious prostate cancer.

Dutasteride was approved for use in the United States and is available in 0.5 mg capsules generically and under the trade name Avodart. It was approved for the treatment of symptomatic benign prostatic hypertrophy. Dutasteride usually takes several months to have an effect on prostate size and the symptoms of prostatic hypertrophy (urinary hesitancy and poor stream). Dutasteride is usually given long term and an effect is usually not seen until 3 to 6 months of therapy. Side effects are uncommon, but include impotence and decreased libido, ejaculation disorders, gynecomastia, dizziness and fatigue. Dutasteride also decreases serum PSA levels which should be monitored during therapy.

The recommended dose of Dutasteride capsule is one capsule (0.5 mg) taken orally once a day. Although an improvement may be observed at an early stage, it can take up to 6 months before a response to the treatment can be achieved. No dose adjustment is necessary in the elderly. The capsules should be swallowed whole and not chewed or opend as contact with the capsule contents may result in irritation of the oropharyngeal mucosa. The capsules may be taken with or without food.

Millions of Americans are still being hit with skyrocketing drug costs. The pain is worse for those without drug coverage, but even many people with insurance are facing rising deductibles and copays, or finding that their plans no longer cover their specific drugs.

If you're facing high Avodart costs, one of the first things to do is ask your doctor whether a generic drug is available for your condition. That can save you as much as 90 percent.

In a recent nationally representative survey, many people who had recently experienced price increases in the cost of Avodart said they had started to shop around for better deals. Ask about dutasteride discounts.

Look for discounts online. Online pharmacies are a good place to start. They offer coupons and prepaid vouchers, which, if you’re not using insurance, can help you get the lowest deal possible for Avodart you fill at retail pharmacies in your area. Have your generic name, dosage, and quantity of dutasteride in hand, and use their location lookup tools to compare prices at various pharmacies. With so many choices, consider these when deciding which is the best pharmacy for you. Being an informed consumer is more important than ever when it comes to buying medication online.

I started Avodart about 1 month ago and my nocturnal urinations have dropped from about 4x to once nightly. No side effects.

I have been taking avodart twice a day for many years. I have noticed no side effects and lab results verify that.